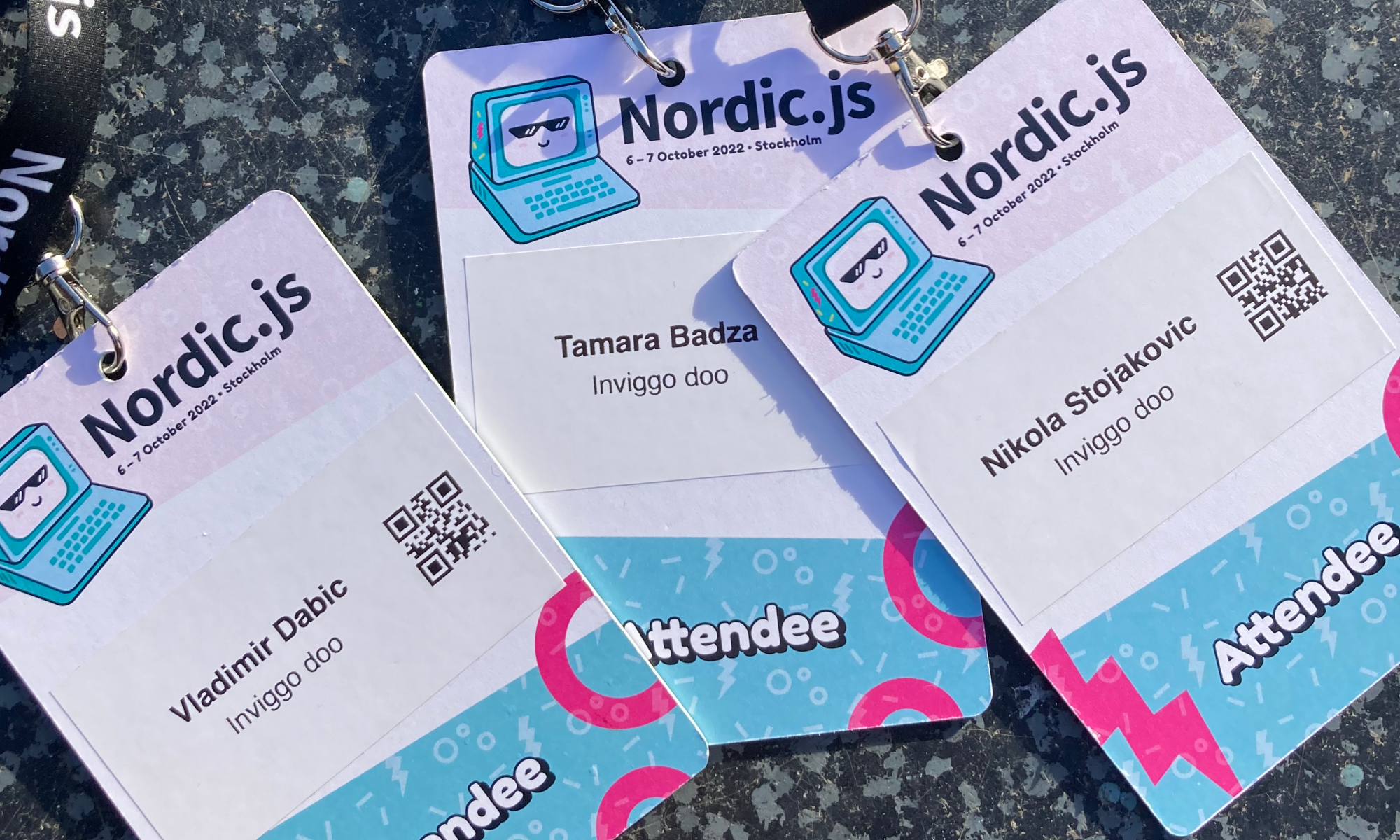 For the past 8 years, Stockholm has been the epicenter of the JavaScript community. Nordic.JS conference has welcomed some of the most talented and skilled developers, designers, and creatives, inviting them to share their achievements with like-minded peers.

This year, the Inviggo team made sure not to pass up on the opportunity to attend the conference and build skills, professional partnerships, and personal connections with internationally renowned JS developers.

In just 2 days, more than 20 speakers talked about their most recent experiments and innovative ideas. They made us think twice about our approach to, not just web development, but all things surrounding employment, onboarding, organization, and procedures we rely on all the time.

Top 8 talks that left us speechless (and inspired)

Upon our return from the windy city, we sat down to gather our thoughts, discuss what we’d learned, and jot down all the things we wish to test on some of the projects we’re working on. In the process, we made a “Top Talks” list of speakers who left the biggest impression.

So for all of our fellow developers who didn’t get the chance to travel far north for the conference, we’ve summarized the key points from our top picks:

Emma was one of our absolute favorites. She is a software engineer at Spotify and an American living in Sweden, plus a cohost of the Ladybug Podcast. Emma believes that everything we do – from writing emails to providing feedback and evaluating performance – impacts the overall team efficiency. She highlights the fact that it is crucial to understand how different cultures approach decision-making, receive feedback, build trust, perceive time, and more.
‍

Thus, it comes as no surprise that her talk primarily focused on explaining how software engineering is a collaborative process. Emma discussed the importance of daily interaction between developers, designers, and clients. For outsourcing companies and large multinational corporations, this could involve communication between people with diverse cultural backgrounds. She showed us how different cultures explain things (low-context vs. high-context), how open they are to foreigners (peach cultures and coconut cultures), how they give and receive feedback (direct and “shit sandwich”), and how they make decisions.
‍

We’d just like to note that her talk did remind us of a chapter from the No Rules Rules: Netflix and the Culture of Reinvention by Erin Meyer and Reed Hasting. The book described Netflix’s approach to employee communication, where they insist on straightforward and transparent feedback. While this process was familiar to some cultures (like the Netherlands), Japan and some other countries were not so fond of the approach.
‍

Even though we noticed an overlap between that chapter and Emma’s presentation, we applaud her for discussing the cultural differences in greater detail. What we appreciated the most were her practical examples that were real eye-openers and left us with something to think about.

Sara is a founding engineer and, as she likes to call herself, an international agent of JS Bullshit. Her talk, “From Blender to the Web – the Journey of a 3D model”, was about demystifying the 3D world and showing that it’s not as daunting as it seems at first glance.
‍

Next to Emma, she gave, by far, one of the most inspiring talks at the entire conference. Using a model from the 3D software Blender as an example, she demonstrated how easy it is to build interesting and accessible web solutions. Although we don’t have any experience with 3D modeling in Blender or Javascript, we still found it fun and captivating.
‍

Sara’s a great presenter – she was coding live while taking us through her thinking process. Thankfully, the demo gods had her back and everything went smoothly. Her skills, knowledge, and confidence were radiant and motivated us to try this stuff out on our own.

Charlie is a senior developer at Stripe whose field of interest revolves around ML, AR/VR technologies, hardware, and creative coding. She is determined to prove that we can build interactive applications using personalized motion detection – and in just a few lines of JS code.
‍

Her presentation was a smashing success. She talked about using Arduino with a gyroscope/accelerator module and Tensorflow.js to implement motion gestures. The demo included a Street Fighter game and movements made using motion gestures – it goes without saying that she inspired us to try something similar soon.
‍

We also suggest checking out Charlie’s website, especially some of her featured projects.

His was one of the more challenging presentations, as Ujjwal talked about the concepts that are less commonly used for JS projects, like Atomics and Shared Array Buffers. When we get to that level, we usually opt for different technologies, like Java, that’s got far better mechanisms to cope with multi-threaded apps and parallel programming.
‍

Still, we recommend anyone interested in upscaling their JS skills to listen to Ujjwal’s talk and spend some time experimenting with this tech on their projects.

Colin is an engineer at Deno Land, a simple and secure runtime for JS, TypesScript, and WebAssembly.
‍

Our colleague Nikola rushed to hear this talk since he started using Deno shortly after it was first released. At the time, one of the things users complained about was the lack of centralized package management similar to NodeJS (package.json), so we wanted to hear first-hand about Deno Land’s approach to solving this problem.
‍

It seems that Deno’s development team managed to uncover the best way to scale. They realized they can’t simply ignore the ecosystem that has been growing and changing for a decade. Now they offer an easy way to include NPM packages in modules, which is a huge plus and a reason to start using Deno more often.
‍

We believe it will take them a bit more time to grow their user base, but they are definitely steering in the right direction. More and more people are taking notice of Deno’s ability to solve one big JS issue – the lack of a standard library for things like encryption, date and time, streams, etc.

Carly is an engineering Manager at Galileo Health and a part of a patient-facing team dedicated to delivering a more reliable healthcare experience to more patients.
‍

Now, her talk was a bit different, as she didn’t focus on solving common web development problems. Carly’s goal at the conference was to raise awareness of common issues with the standard interviewing process, where talented candidates are passed over as they don’t perform well during in-person interviews (i.e., interviews where applicants are being watched as they code).
‍

The problem is that developers spend hours, and sometimes even a lot of their own money, on platforms designed to help them master the skills necessary to pass the interviewing process successfully. But she questioned if this is really the best indicator of a potential candidate's knowledge.
‍

Although this form of hiring interview is not as common in Serbia, we have met a few people over the years who talked about the stress associated with live coding.
‍

She presented novel ideas for improving the interviewing experience that would put less stress on candidates and provide employers with a bigger picture of their skills:

P.S. If you’ve discovered a new way to test applicants’ knowledge, we’d love it if you could share it with us! We’re always excited to hear about new methods of hiring and onboarding that could help us create a positive experience and pick the most suitable candidates om the process.

Since its earliest days, Inviggo has been involved in Telehealth projects, developing solutions that would help make medical and pharmaceutical services more accessible – in every way possible.
‍

The importance of web accessibility stretches across industries, but it’s a particularly important subject in the healthcare industry. Namely, by building accessible software, we enable all people, with or without permanent/temporary disabilities, to manage all aspects of their health without limitations.
‍

This is something we had the privilege to learn pretty early in our careers, so we made sure to attend the two talks that centered around this subject matter.
‍

Britta Evans-Fenton, a mobile developer from Shopify, gave a brief but powerful, straight-to-the-point, 5-minute explanation of how to use screen readers.
‍

We also couldn't miss Ema Twersky’s talk about ARIA roles and attributes (Accessible Rich Internet Applications), which focused on explaining how they are a vital part of the web development process.
‍

In a very practical and interactive way, she showed how ARIA components function alone and how they interact by comparing ARIA in accessibility with aria in music.
‍

Ema demonstrated how it could be used to create a more self-contained accessible web experience. We learned that it is fickle and that developers should be careful not to let ARIA-role seduce them.
‍

ARIA labels are mostly used for adding more descriptive labels to HTML elements (e.g., buttons or links), or to make easy-to-use form elements for screen readers, etc. However, she urged us to use ARIA wisely, as there are some pretty strict rules on when NOT to use ARIA. Most importantly, she taught us that NO ARIA is better than a BAD ARIA.

Last, but certainly not least, Vitaly Friedman. He’s the creative lead and co-founder of Smashing Magazine, known among his peers for his passion for typography, interface design, and writing.
‍

Vitaly evoked our childhood memories by including in his presentation the sites and games we all loved in the earliest days of WWW. He wanted to show us how far we’ve come since the first, chaotic bookmark sites. But considering the number of pop-ups and CAPTCHA tests at every corner, one might say we’re still experiencing a few hiccups with web performance.
‍

During his talk, we wrote down some of his best practices for optimizing user experience. According to Vitaly, you can take the UX to the next level by:
‍

We’ll certainly test a few of these – how about you?

Nordic.JS truly met our expectations. All speakers really are masters of their domain, and they successfully communicated their ideas to the audience. Some of them did it in no more than a few minutes! For the very end, we’d like to single out the following:
‍

Benny showed us what it looks like when 800 developers work on a single site! In 2018, he participated in Hacktoberfest, where he was faced with 1800 forks and 2000 pull requests and managed to build, what he calls, a horrendous site.
‍

Anton gave a 5-minute lightning talk on implementing various designs using only CSS. If you’re interested to learn more, you can check out the demo here.

Between the talks, we mingled with representatives of different companies who set up their booths to showcase their products to anyone interested. We spoke to peeps from MongoDB and learned a bit about the new functionalities they’re implementing. We also got a $100 credit for MongoDB on AWS Marketplace, which will surely come in handy for some internship projects we’re about to start.