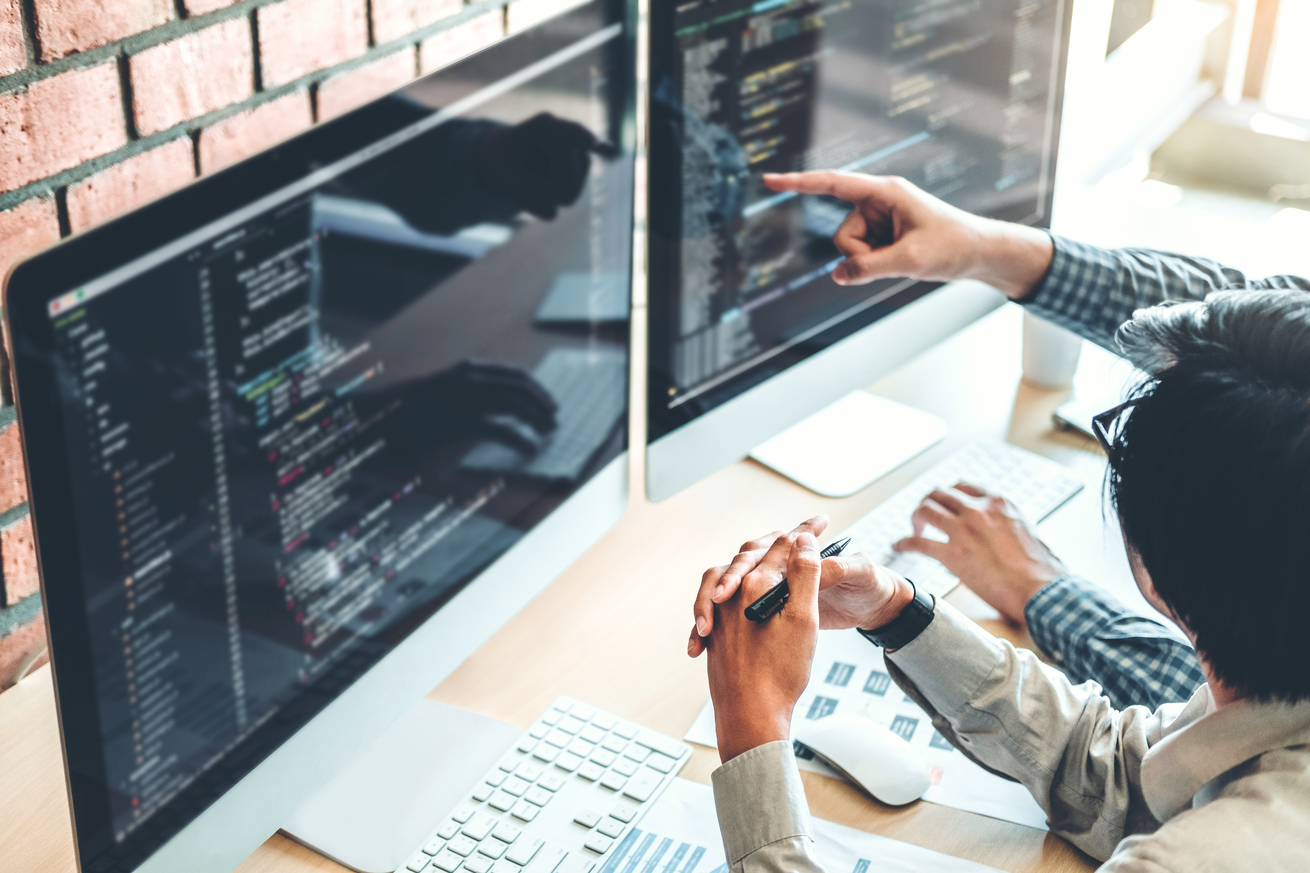 JavaScript is by far the most commonly used programming language. While it’s been around for almost 30 years, it maintains its position among the top development trends even today, when all the focus is on UI, UX, testing, and different aspects of product tech management.

At first, JavaScript was an attempt to standardize the programming language and build a convenient frontend ecosystem. It was originally used mostly for the client-side, but due to JS’ coding simplicity, exceptional performance, efficacy, and immediate feedback for users, it became the language of the web.

It supports functional, event-driven, and imperative programming types, but when it comes to the choice of a specific JS framework to be used - the final decision depends on the ready-to-use components necessary to complete the project.

What is a JavaScript framework?

JavaScript frameworks are free, open-source JS programming libraries that contain pre-written code developers can use for standard tasks and functions. Though the development of websites and web applications is possible without JS frameworks, their power to hasten and simplify the process only gave a boost to their popularity. The fact is - these pre-written, RTU patterns and functions increase developers’ productivity, helping them tackle any project faster and more efficiently.

Top 7 most used JavaScript frameworks in 2021

ReactJS is an open-source JavaScript library. It is widely used in the development community due to its speed, efficiency, flexibility, high-performance, rich-toolset, and strong community support, among other things.

It was created by Facebook developers who looked for the best way to complete building Facebook Ads as efficiently as possible. The early prototype appeared in 2011 and in a few years, ReactJS was available to the public and leveraged by some of the biggest brands: Airbnb, Netflix, Dropbox, PayPal, and others.

ReactJS is suitable for building dynamic and responsive interfaces due to its component-based architecture, where each of its reusable components represents a specific feature of the product like a logo, button, or web page. These components are code blocks classified as functions or classes, and the parameters used to create elements of products are called props (properties). Each of them has its own logic written in JavaScript, which means developers are able to manipulate data without affecting the DOM.

ReactJS operates with a virtual DOM that enables simpler and faster implementation of updates. Owing to the memory reconciliation algorithm, a web page can be replicated in the virtual memory and only the updated components are re-renders, not the entire UI. All this allows for a fast and flexible application development which makes the process more efficient and cost-effective.

All this makes React web development the best option for fast and scalable front-end for mobile and web apps. With this particular JavaScript library, developers have the freedom to create applications that are both high-performing and appealing to users. Today, React is widely accepted by companies who take the mobile-first approach as it is equally beneficial for single-page and large-scale applications.

What developers also praise about this framework is the unidirectional data flow that lets them make changes to individual components directly. This gives greater control over the process and enhances the overall productivity.

ReactJS is simple to learn, especially for those who have already mastered JavaScript, as it uses JSX, an XML-like syntax extension (a combination of HTML and JavaScript). It is one of React’s most prominent features that makes the developers’ job easier without compromising the quality of the final result.

However, since this library is lightweight in nature and only supports UI components, there are certain limitations in terms of functionality, which means third-party services need to be employed. Still, React web development remains one of the best solutions for building interactive UIs.

Technically, Node.js is not a framework nor a library but a runtime environment and, as such, it is commonly used to build server-side applications.

Although it was first introduced in 2009 as one of the most exciting pieces of JavaScript software, the pros and cons of Node JS development remain to this day the subject of heated debates in the development community.

On the plus side, it comes with a robust tech stack that positively affects developers’ efficacy and productivity, the speed of development, and product performance. Add a wide range of free tools to the mix and you provide your team with greater flexibility to build more complex products with less effort involved. Node.js also allows you to reuse the code as the same language is used for the front and backend. The use of the same language for both sides is also helpful for real-time and event-based applications that require constant data updates.

Node.js uses an asynchronous, non-blocking, single-threaded I/O model, which is why it is so lightweight and efficient. The features allow Node.js to process requests without delays.

Node.js’ lightweight character also comes in handy for microservices architecture where each has its own logic and runs in its own process. This allows for greater flexibility and scalability, so no wonder giants like Netflix, Walmart, and GoDaddy managed to outperform competitors and dominate their respective fields by relying on Node JS development.

Node also comes packed with npm, a default package manager that contains more than 830,000 libraries in the registry. With such a range of tools at disposal (and about 10,000 being released daily), it is no wonder Node.js enjoys rapid growth in popularity in the development circles.

In the end, rest assured that this runtime environment comes with a strong support system which currently includes Trello, Uber, Medium, Zendesk, and PayPal.

Unfortunately, Node.js is not capable of processing heavy computation tasks. Also, due to its asynchronous nature, a developer might be faced with multiple callbacks and queued tasks in the background. Finally, Node is not as simple to learn, especially for developers who don’t have a solid background in backend development.

With everything in mind, it is evident that Node JS development is an obvious choice for specific applications where scalability and intense I/O are required. These include forums, live chat, social networks, stock exchange servers, gaming apps, and more. It is beneficial for broadcasting and encoding audio, video, multiple-file upload, and streaming.

AngularJS is a Model-View-Controller (MCV) framework used by half a million websites in the world, among which are none other than Google and Youtube.

Angular allows developers to combine HTML and JavaScript with CSS. It is a component-based framework just like React, which means each piece can be easily reused and manipulated as needed. Thanks to three separate components, it is used to write easy-to-support and well-structured code.

To use Angular, developers leverage TypeScript that relies on the same syntax but has improved OOP support and static typing.

This framework is characterized by two-way data binding that enables developers to implement any changes instantly, which makes it ideal for simple projects. It is primarily used for Single Page Application (SPA) development. For more complex products, one-way data binding is a more time-efficient way that saves resources.Vue.js

Vue.js is one of the youngest frameworks on the list, but because it is so lightweight and offers out-of-the-box solutions, its popularity surged rather quickly.

Vue is open source and easy to learn if you have background knowledge in JS and HTML. It is adaptable, which makes this framework easy to integrate with other projects built using JavaScript libraries.

Vue features templates, components, transitions, two-way data binding, and focus on reactivity which happens after a change is made to JS objects. Its command-line interface (CLI) features presets, plugins, and instant prototyping, and as such helps speed up the development process.

It is mostly used to create creative UI and is widely praised for its fast page rendering which is possible due to its Shadow DOM.

jQuery is one of the most widely deployed and most important modern-day JS libraries used by WordPress, IBM, Facebook, and Google.

It is a fast and concise cross-platform JavaScript library that simplifies HTML client-side scripting. jQuery is intended to simplify HTML DOM tree manipulation and traversal, along with CSS animation, event handling, and Ajax. With this library, developers are able to create abstractions for animation and low-level interaction, as well as advanced effects and widgets. By taking a modular approach, it is possible to build web apps and powerful dynamic web pages.

Backbone.js is a lightweight JS library used to build SPA. It helps develop structured client-side applications running in web browsers, as well as build complex functionality with less code because all server-side functions flow through an API.

What sets it apart from other frameworks is the fact that it allows developers to select on their own the tools that they believe are best for a project at hand.

Ember.js is a flexible, scalable JavaScript framework of choice for large projects. It is an open-source library popular because of Ember CLI that comes with a multitude of built-in features.

Real-world examples of how JavaScript is used to fuel success

We already gave a couple of hints throughout this article on who has already jumped the wagon on JavaScript. But allow us to provide you with a bit more context here:

And what are you waiting for?